During ESM 2015, the first experimental practical was held - Magnetic Force Microscopy. Two microscopes were operated - one transported from Institut Néel (France), 2 microscopes (explanation below) provided by NT-MDT company. 4 sessions (8-10 students each) +1 open were held. Despite non-ideal conditions and environment nice images were acquired.

Magnetic Force Microscopy (MFM) is based on Atomic Force Microscopy (AFM), where interaction between sharp probe (tip) with the sample is measured. In principle most of the AFMs can be used for MFM, provided that magnetic tip is used (magnetic coating on a conventional AFM probe) and microscope does not contain magnetic parts (usually holder embedded in the scanner) that disturbs the measurement. List of the instruments available during the school follows:

Microscope from Instut Néel was disasembled and packed in four boxes (see image below) by local research engineer Simon Le Denmat who had an ingenious idea to add hard magnetic sample (not so influenced by external magnetic field). This turned out to be extremely useful, as provided microcope from NT-MDT contained magnetic parts and our standard soft sample (patterned permalloy film) cannot be used. The microscope was delivered to the local university and then transported to the venue. 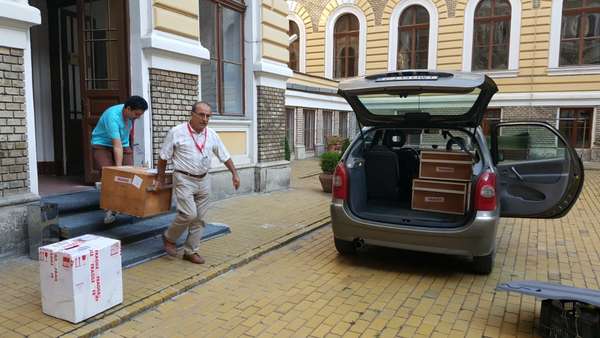 At place it was unpacked and assembled during first two evenings. An image of almost ready microscope (no insulation against acustic vibrations): 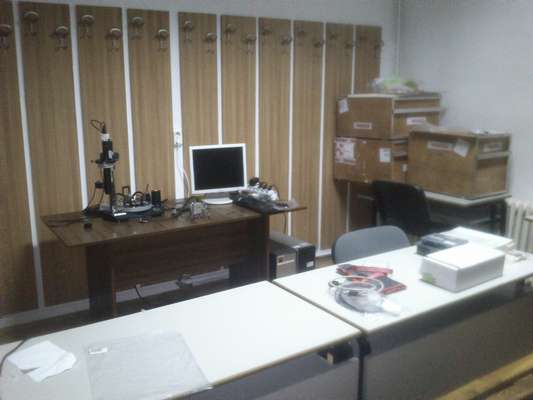 Solver Nano microscope was delivered the same day as the first practical was held, fortunatelly the software was similar to the one on other microscopes and the session was held rather sucessfully despite limited amount of time for preparation. Unfortunatelly embedded magnetic holder prevented us from using standard ESM sample with permalloy nanostructures. Nevertheless, FePt hard magnetic film was used instead.

Two instruments were operated - Ntegra Aura from Institut Néel and Solver Nano from NT-MDT company. Primitive insulation against acustic vibrations - a semi-inflated tire (from bike?) in case of Ntegra Aura instrument, Solver was operated without any insulation. Despite some annoying problems (inoperational mouse, problem with optics, noise), rather good topographical images were acquired and in case of Ntegra Aura also very nice magnetic images of permalloy nanostructures and domain walls in permalloy strips. 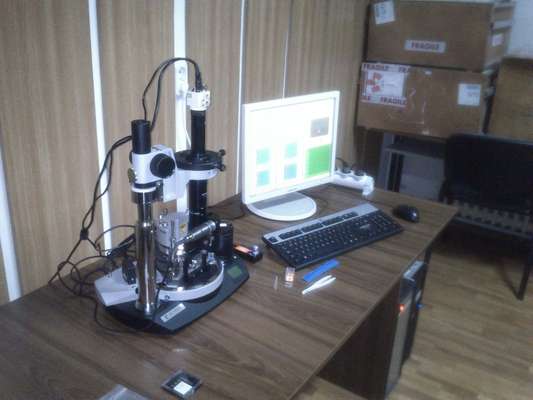 Below is one of the images made at ESM2015, featuring a vortex domain wall in a strip of 30nm-thick Permalloy 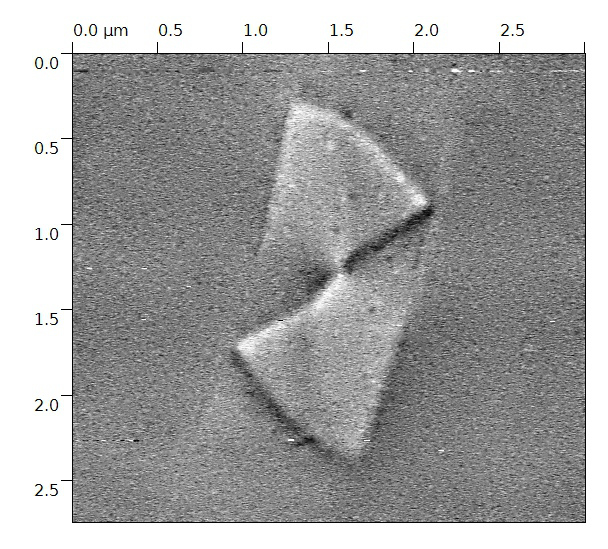