A FETFLAG proposal has been submitted with Spintronics as a key technology, which may lead at the foundation of a European Flagship program 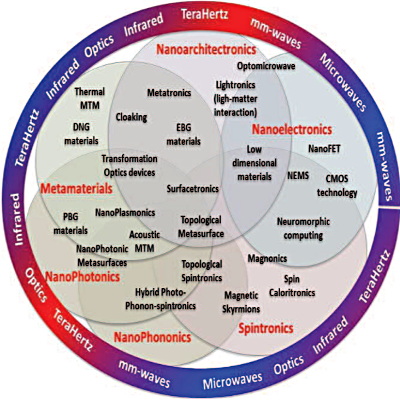 The “Nano-Engineering” Flagship introduces pan European and world wide connectivity in a new era: the human centric omni-connectivity, the cooperation between people, machines and their environment. It is based on a key enabling ICT: the Nano-engineered Interface (NaI), a non-invasive wireless, nanostructured surface-based functional system. This revolutionary technology will allow omni -connectivity (real-time communication, sensing, monitoring, and data processing) among people and interconnected machines and systems, in a “transparent” way. It will put humans and their ways to interact at the centre of the digital society, being a monitoring and yet highly protected with confidentiality everyday companion. NaI will be a highly complex hierarchical bidirectional (transmitting/ receiving) system, extremely thin at human scale, and complex at nanoscale. NaI will integrate enhanced connection/elaboration capabilities and sensor functionalities at different scales (nano-, micro, meso-, macro-scale). It will be intrinsically secure by material construction, energetically self-sufficient by ad hoc energy harvesting integrated modules and cognitive/adaptive by environment awarness. Its creation requires an extraordinary and long-term effort in heterogeneous integration, both of material nano-fabrication and multiscale modelling/design. Metamaterials will merge to nanoelectronics, phononics and spintronics. Magnetic materials will have a major role in this process of heterogeneous integration to design novel functionalities such as energy harvesters, random-number generators, new computing hardware, security protocols, etc. Nano-Engineering will unite Europe’s leading nano-scientists and engineers, providing them with a common framework and R&D infrastructure. This Flagship project will greatly contribute to Europe’s efforts to be a worldwide leader in the new generation of data-secured ICT nano-systems. 126 European research organisations and top-ranked researchers from the areas of Nanoarchitectronics, Metamaterials, Spintronics, Phononics, and Nanoelectronics will also be actively involved. European high-tech industrial leaders have endorsed the Flagship concept.

The coordination of Spintronics in the FETFLAG proposal is an action of SpinTronicFactory.